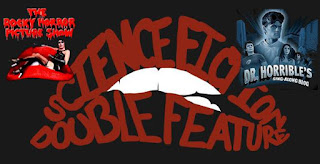 For October, we skipped ahead on our list just a little bit for The Rocky Horror Picture Show. If you're not familiar with this production, it is a musical comedy spoof of the classic, cheesy sci-fi/horror genre. The introduction song to this film references science fiction double features, which were common back in the day. Because Rocky Horror is in and of itself a short film, I decided to make this night a double feature as well. We watched Rocky Horror from start to finish, took our dessert intermission, and then watched Dr. Horrible's Sing-Along Blog, which is another sci-fi musical comedy that runs pretty short.
The meal for this event was easy to come up with. There is a dinner scene in Rocky Horror where the guests discover that they are (Spoiler) eating Eddie, a character who was played by the musician Meatloaf. So, for that reason, dinner was once again meatloaf with sides. The dessert for the evening came from Dr. Horrible and was frozen yogurt with toppings, a snack featured in the film. During dinner, I played my Mad Scientist playlist that I had made for Absent-Minded Professor.
Overall, I consider this event an overwhelming success. There were some guests who found the content of Rocky Horror disturbing. That was to be expected, and I did warn them beforehand that there were strong sexual elements in the film. Thankfully, the lightheartedness of Dr. Horrible helped bring things back.
Labels: Halloween