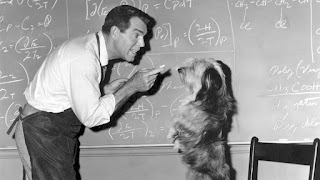 The next film on our list was "The Absent-Minded Professor," which if you are not familiar was the original film that was later remade with Robin Williams as "Flubber." For the theme for the film, I decided to go a bit more abstract. The main character of this film was always caught up in his science and would lose track of time or other things. I thought, "What would a man like this eat, when his mind is clearly elsewhere?"
I imagined him grabbing a couple slices of bread, putting on it whatever he happened to have in his kitchen or fridge, and then eating his makeshift sandwich while he returned to his formulas. So that was our dinner theme: absent-minded sandwiches. So, for our meal, I prepared many slices of toast and made a table spread of toppings, some of which were regular sandwich toppings and many that were not. Guests were encouraged to experiment with putting things on their sandwich that normally wouldn't mix. For fun, I also had donuts, which people were able to use a sweet bread substitute. While we ate, I played music from a Spotify playlist that I had made just for the occasion. It was songs about science or mad science. Below is a picture of our spread. 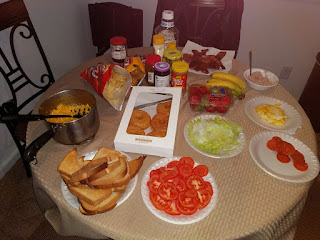 For dessert, I wanted to make Flubber. I'll be honest with you, it was a bit of a flop. I melted gummy bears and then tried to add stuff that would keep the consistency gooey. It did not work. Though it certainly had a flubber like consistency for a while, once it had cooled it just returned to a solid gummy form. That made it difficult to serve and eat. It made for some fun pictures though. 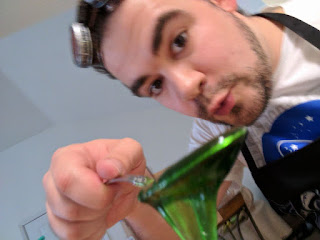 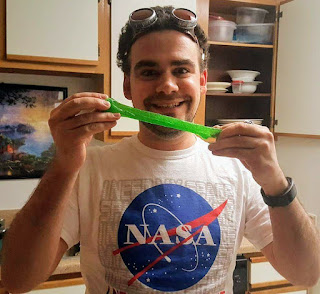 Overall, I would say the meal was big hit. The dessert? Less so. If any of you reading this discover a way to make a good flubber-like substance that holds is slimy form, please post about it in the comments.
Labels: Music Playlist