As we continue through our movie list, we finally arrive at one of my all time favorites: Clue. This classic, comedic, murder mystery leads itself to all sorts of fun dinner party ideas. You could make the evening black tie event and encourage all your guests to dress in their best formal wear. Or maybe you could start the evening with a murder mystery game. This was my original plan, but honestly, I spent so much time focusing on dinner, that I forgot about this.

So, dinner. For this event, I wanted to go full immersion, so I served the same dishes as the film. Or, at least in spirit. In the film, they start with an appetizer of shark fin soup. This became our dinner. I did my best to make an authentic dish for this. For dessert, we had a less authentic snack of "monkey brains" which though popular in Cantonese cuisine, is not often to be found in America. So, I made something completely different that was simply inspired by the name and has no relation to the original dish.

For the shark fin soup, I researched this dish quite closely while searching for an authentic recipe. What I learned was pretty surprising to me. This dish was originally considered a symbol of wealth and status, but later, it became common among middle class and poor, because it was easy and inexpensive to make. It ended up becoming a common dish sold by street vendors, who would sell it in a paper bowl. Unfortunately, the popularity of this dish led to the overfishing of sharks, with stories of some fishermen catching sharks, cutting off their fins, and throwing them back into the ocean to die. Because of the unethical harvesting of these sharks, most places started banning the dish. This led to creation of imitation shark fin soups, which quickly filled the void of its predecessor.

Imitation shark fin soup is considered a popular dish in many Asian countries today. When looking for a good recipe, I found so many different variations. What I ended up doing was making my own version using the things that many of these dishes seemed to have in common.

Fun fact: Variations of this dish are served with many different proteins. You may think that these proteins are meant to replace the missing shark. You would be wrong. Shark fin is stringy and flavorless. The glass noodles are actually the shark substitute. The particular proteins used are less important, but almost every version contains chicken.

This soup was easy to make, but the ingredients may be difficult to find if you do not have a well stocked Asian market near you. 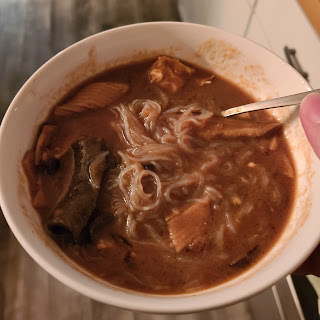 This dish was not the most flavorful thing I have ever made, nor was it the most beautiful, but it was very hearty and filling. You may want to add additional flavoring in the form of soy sauce, sesame oil, fish oil, or red vinegar.

When I made this dish, I had a guest with a soy allergy and another with soy sensitivity, so I made two pots. One the way described above and a second pot where I substituted the dark soy sauce with my own alternative seasoning. I already had a bottle of Coconut Aminos, which is a common soy sauce substitute, but unfortunately it is thin, watery, and sweet. This would not be a good substitute for dark soy sauce. Thankfully, I also had Worcestershire sauce available. It has a similar saltiness, color, and thickness to dark soy sauce, but it has a strong barbecue flavor, which wouldn't fit this dish. What I discovered is that when I combined these two, the sweetness of the amino cancelled out the barbecue taste of the Worcestershire. I did not measure how much of each I used, but I would guess it was about 3 or 4 parts Worcestershire to one part coconut amino. In the end, the flavor turned out good, but the soup was significantly lighter in color than the pot of soup that used the dark soy. 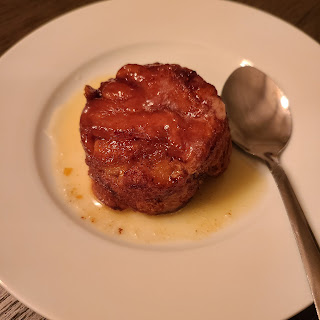 Ingredients:
3 tins of uncooked Pillsbury cinnamon rolls (You will not end up using all of this, so expect leftovers)
1/2 cup or more melted butter
1/2 cup or more brown sugar
Tools Needed:
muffin pan

Overall, this unique twist on monkey bread came out really well. All the guests seemed to enjoy it and some came back for seconds. Honestly, I think they looked great and tasted just as good as it looked.

In the end, I think this was a successful event. The movie was good and the food tied in well with the film.