It's time for one of my childhood favorites, The Dark Crystal. This is a magical film, but with a lot of darkness throughout. For the meal, I decided to focus on some of that darkness.

There is a scene where the evil Skeksis are eating an elaborate, carnivorous feast. Tearing carcasses apart with their beaks and claws, it is very messy scene. I decided that our meal should imitate that.

For our main course, we ate what can best be described as spaghetti subs. To make these, I purchased several white sub rolls from the local grocery store. Spaghetti was made normally. While the spaghetti was being made, you cut open the subs from the top and coated the inside of the rolls and the top of the rolls with a garlic coating made from butter, garlic, and parsley. When the spaghetti was done, it was put inside the subs, covered with parmesan cheese and put in the oven, which was set to broiler at 450. Subs where left in there until bread was crispy. 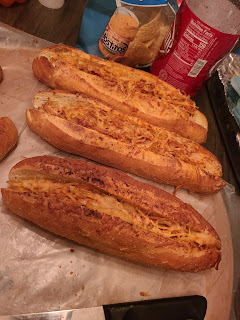 The end result is was a messy, but tasty sandwich. The bread had the flavor and consistency of garlic bread, and also got garlic butter on your fingers while you ate. Meanwhile, messy spaghetti noodles would come out with every bite, getting sauce on your chin. The action of eating the sub was meant to reflect the Skeksis tearing apart prey. I feel like it met that goal well.

For dessert, I based our meal on the dessert that the Skeksis ate at that meal, which were furry rodent creatures.

To make this, I followed this video recipe for chocolate truffles. The only thing I did differently was that I used Peel and Pull Twizzlers to make rat tails for each ball. 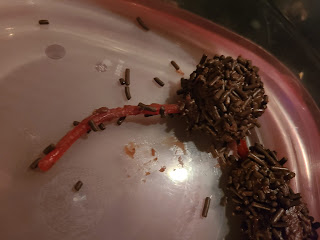 Some notes: The video does not give you a clear idea of how long this will take. It took me a few hours and I was rushing it. I would suggest making these the night before to ensure they are done correctly and have had time to set.
In addition to these things, we also had moist watermelon and some ships and dip. Everything was eaten with our hands and napkins were very necessary.
Labels: Recipe