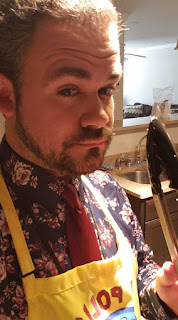 My name is Matthew Wisner. I am a school teacher, a dancer, a movie lover, a food lover, and a major geek. Several years back, I met a very interesting man at a dance event that I had been attending. He told me about how once a month, he opened his home to people for fellowship, food, and fun. He explained that he had been working his way chronologically through animated films, mostly Disney cartoons at the time. As someone who loves both Disney and food, I was intrigued and expressed my interest in seeing this first hand. He invited me to his next event. Upon attending, I immediately fell in love with the concept and continued to attend every month for the next few years. At the time, I live an hour away. I kept telling him that once I moved to the city, I was going to host my own movie nights, but with live action films, so as not to overlap with his list. This did eventually in 2015, and within a couple months of moving into my new apartment, I hosted my first event with The Wizard Of Oz. 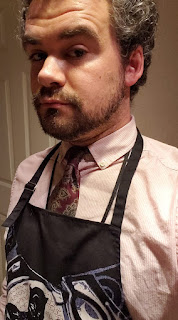 Nathan, the man I made reference to earlier, had become good friends by this point and I learned a lot from him on how to host one of these nights successfully. It was he who established the idea of pausing the film at the half way point for dessert, and that is something that has worked very well for me as well. The only thing that is particularly different about his nights and mine is that I tend to put a lot more emphasis on dinner themes. He would certainly touch on it from time to time, such as when he made ratatouille to accompany the film of the same name, but I almost certainly take it a little further by incorporating themed background music, dessert, and even the occasional games.
Up until our recent COVID lockdowns have made dinner parties no longer feasible, I had hosted one almost every single month for the last 5 years. As I go, I have grown, and the food and themes seem to get better and better. I hope that this blog will inspire some of you to break out of your comfort zone and host your own social gatherings once circumstances allow.