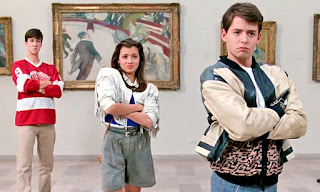 Our January film was Ferris Bueller's Day Off. Though the town Ferris lives in is fictional, they visit several Chicago landmarks on their trip. Also, there is a scene where Ferris impersonates the "Sausage King of Chicago." For this reason, I decided a good meal for this film would classic, authentic, Chicago style hotdogs. If you don't love this idea, you could also go with German bratwurst as an alternative. This would still align with the "sausage king" concept, but would also connect to the German parade float and song that appear in one iconic scene.

In my research, I was quick to discover that Chicago hotdogs are not just regular hotdogs with specific toppings. According to everything I found online, the people of Chicago are picky about the brands they use as well. In the same way that I as a South Carolina resident won't accept mayonnaise that is not Duke's, and my Hanover, Pennsylvania family will only buy pretzels from Snyder's of Hanover, an authentic Chicago hotdog can only come from Vienna Beef hotdogs and eaten on Rosen's poppyseed buns. Toppings are also important, and I will go into more detail about that below. 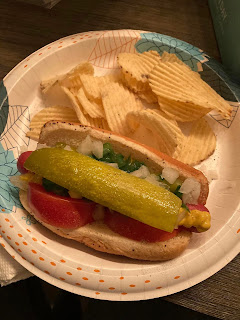 The good news is that these Chicago ingredients can be ordered online. I bought mine from Amazon and they arrived quicker than expected. I put the hotdogs and buns in the freezer so they would still be good by the time of the party. The buns I took out and put on the kitchen counter the day before the party, and the hotdogs went from the freezer to the fridge at that same time. Both were thawed by the time of the party. 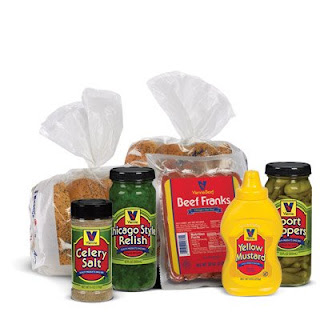 The kit came with everything I needed except for onions, tomatoes, and kosher dill pickle wedges, which I purchased at the grocery store the morning of the party. Some of these ingredients like the mustard and celery salt could have been purchased at the store, but I decided to go with this kit because it came with Vienna Beef hotdogs, Rosen's poppyseed buns, and the neon green Chicago-style relish that are all staples for an authentic Chicago dog and can be hard to find elsewhere.

So, how do you actually make a Chicago dog? It's not that hard. The way you cook the hotdog is up to you, but based on what I read online, steaming it is the most authentic way. It creates the feeling and effect of getting a hotdog from a street vendor, which is where Chicago hotdogs got their start. Another nice thing about steaming a hotdog is that you can't really overcook it. I was able to leave the hotdogs in the steamer the whole time that guests were arriving and was able to serve them directly from the pot. Boiling a hotdog too long can make it soggy and gross. Baking hotdogs means that any guests who arrive late will have to reheat them. But with steaming and leaving it in the steamer, the hotdogs will always be served hot. Of course, I turned off the steamer after all guests were served.

The bun should also be steamed. If you're like me and only own one steamer, you can create the same effect as a steamed bun by wetting a paper towel, wrapping it around a bun and microwaving it for 30 seconds. The bun will come out pretty hot, and it will also be very soft, just as it would be if you had steamed it.

To prepare your veggies, dice your onions. You can use white or yellow onions. I used yellow, because I prefer the flavor. You will also need tomatoes. Each tomato should be sliced in 1/8 wedges, which are made by slicing the tomato in half, cutting each half in half, and then cutting each remaining quarter in half again. All slices should be made long ways. This will create 8 roughly equal wedges. I have seen some people use tomato slices, but wedges are the preferred way.

So, here's how you plate your Chicago hotdog. Put the wiener in the bun first. On one side of the hotdog, you will put two tomato wedges. On the other side of the hotdog, place two or three sport peppers. Now top your hotdog with mustard, followed by the neon relish and diced onions. Top it all with a pickle wedge. Typically, this would be pointed down, which creates a kind of ceiling to your sandwich. Lastly, sprinkle your celery salt on top for a little extra flavor.

The end result is a very hearty hotdog that is almost more of a delicious sandwich. I was surprised by how well all of the ingredients compliment each other. I do not typically like vegetables. If I had made this hot dog on my own, I would have left off the onions, relish, and peppers. Instead, I ate it the correct way, thinking that I wouldn't really like it, but wanting to try it for the experience. It was quite good. The veggies complimented the all beef hotdog rather than detracting from it. My guests felt the same way. One of them did not like pickles, but she liked it on her hotdog. Another, like me, didn't like relish, but enjoyed the hotdog in the way it was made. Overall, with all of our diverse palettes, no one disliked these hotdogs prepared just the way they were intended. That was a big surprise for me.

So, I bet you're wondering why the hotdogs are made this way. It turns out there is rich history behind it that goes back to the great depression. Hotdogs were cheap, but they were not necessarily filling or nutritious. To make up for this, they would load their hotdogs up with various vegetable toppings. This allowed you to have a filling and nutritious meal out of a single hotdog and it only cost about a nickel. Over the years, the toppings have changed some and have now become the classic Chicago hotdog.
If you are curious about the neon green relish and why it's so brightly and oddly colored, there's a story behind that too. Apparently, it is due to marketing. When photographing their relish for advertising, the relish would appear brownish due to the limitations of the technology. That was not very appetizing looking, so they began making their relish neon colored in order to photograph better. In the years since, it just became tradition.
Now for dessert. I decided not to go all out for this one. One of the subplots of this movie is that Ferris's lie about being home sick escalates throughout the film with rumors building on rumors to the point where the whole town thinks he is deathly ill and in need of a kidney. This causes everyone to rally behind him and support him with flowers and gifts. So, I decided to keep it simple and get a large cookie cake with "Get Well" written on it and balloons. I had leftover icing from our gingerbread decorating last month, so rather than have the professionals do the writing for me, I decided to write the message myself. Unfortunately, my icing melted and my message became a mess. hahaha Still, the dessert was good and guests understood what I was going for. 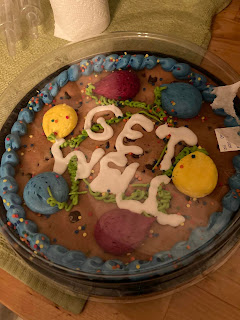 I also bought some flowers to decorate. I didn't get any balloons, but I definitely considered it. If you wanted to go all out with your decorations, flowers and "Get Well Soon" balloons would definitely be the way to go.

Overall, I would say this was a very successful event. The food was delicious, the movie was great, and everything tied together. Also, I got to give us all an experience we had not had before, eating authentic Chicago hotdogs. These kind of authentic and memorable experiences are what my parties are all about and what I constantly strive for.