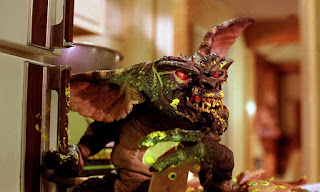 For our December Christmas film, we decided to do a less traditional Christmas movie from the 80's "Gremlins." The theme for our meal was "midnight snack." We had some leftover KFC chicken, which I had bought earlier in the day and put in the fridge and also sandwich makings. The idea was for guests to fix their own plates using whatever "leftovers" they could find. Chicken and sandwiches were both chosen because they were the food that the gremlins ate after midnight.

We had other fun treats though. Last year, I purchased a cocktail making machine called the Bartesian. It acts like a keurig with pods containing mixer ingredients which combine with different liquors to make some tasty cocktails. In December, the company sells a 12 day advent calendar called the 12 Days of Bartesian that contains 12 different holiday themed cocktails. I bought one of these and decided to use it to add some fun to our dinner party. 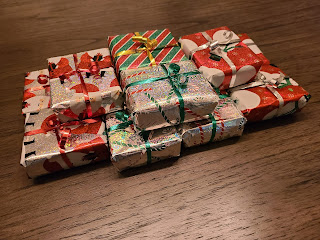 What I did was individually wrap each of these 12 drink pods and with them we had a little "white elephant" style gift exchange. In the order that the guests arrived, each of them had the choice to either grab a random gift or steal one that someone else had already opened. It was important to me that they each had something they liked, so we went around twice, giving everyone a second chance to swap their pod if they wanted to. After everyone had a drink they thought they would like, I went ahead and made them. One of the nice things about the Bartesian is that you can choose the strength of your drinks when you make them: low, regular, strong and even alcohol free. A few of my guests don't drink or don't drink often so having the ability to make them a weak drink or a "mocktail" was very useful. These drinks were served during dinner.

During dessert, guests decorated and ate gingerbread men that I had baked earlier in the day. This is always a fun and interactive thing to do. Some guests got really creative with their decorating. Some of these are featured below. 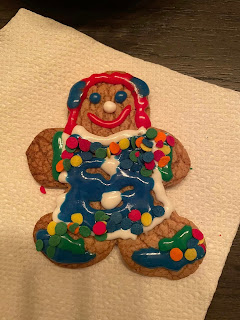 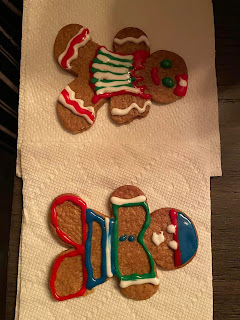 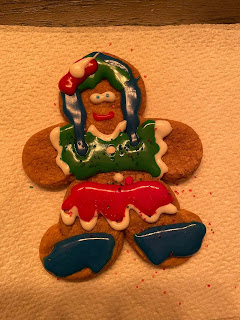 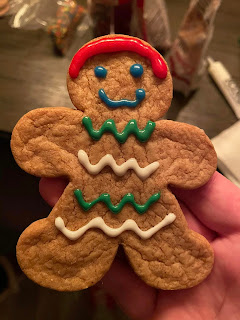 Overall, even though dinner was nothing unique or special, this was definitely a successful party. It was clear that guests were having fun, which is always priority number one.