Suppertime at The Little Shop of Horrors (#73)

This year's Halloween movie was Little Shop Of Horrors. I struggled a bit coming up with the theme for this one. The meat-eating plant made me think about meat in a plant, such as stuffed peppers. I also thought about taking the idea of an alien disguised as a plant and going with a disguised food theme, where food looks like something it isn't. This eventually evolved into what I actually made: "Bouquet Wraps." 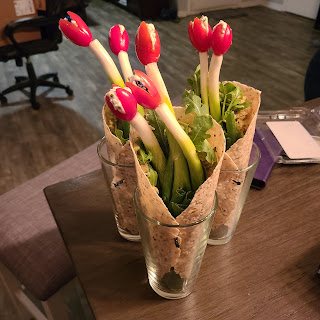 This worked very well as far as fitting the theme of the movie goes and making them was fairly simple. The flowers were made by quartering grape tomatoes not quite the whole way and using a toothpick to attach them to the stalk of a green onion. Be sure to cut off the roots first. Then, we put some herb flavored cream cheese inside the tomatoes, which helps the pedals puff out and look more like a flower.

Inside the wrap you can put whatever ingredients you like. We used a vegan chicken salad recipe. If I am being honest, it didn't come out that good, which is why I am not attaching the recipe here. Put your ingredients and a couple "flowers" in your wrap and then wrap it into an ice cream cone shape. I suggest folding the bottom upward to help hold the contents in place before wrapping the sides. The tricky part is getting it to keep that shape. If you had something like newspaper and string, you could wrap the wrap like a real flower bouquet. Because I did not have that, but did have more toothpicks, I used a toothpick to help hold the wrap together. Then, I placed them upright in tall glasses to display them and to keep them from falling apart before dinner. Make sure that you warn guests about all toothpicks before serving. 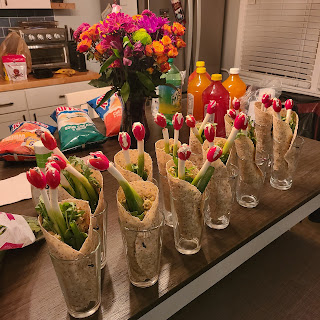 Along with fitting the idea of disguised food, these bouquet wraps also fit very well with the movie in another way, because it takes place in a flower shop. For dessert, I kept with that theme and made classic "jars of dirt" consisting of chocolate pudding, whipping cream, and Oreo crumbs. This was to continue with the flower shop theme, and it did that well. In addition to traditional gummy worms, I also had some Big Chewy Nerds, which reminded me a bit of exotic plant seeds.

Overall, I would say that the theme of the night was a big hit. Everyone loved the appearance of the wraps and they fit in with the movie perfectly. The only problem was the flavors were very strong. The wraps that I used were flavored and along with the faux chicken salad, and the green onions, it was a bit much. If you were to imitate this, I would suggest just using the flowers as garnish and removing them before eating. Of course, you can still eat the cream cheese stuffed tomatoes, provided you are careful to avoid the toothpick.