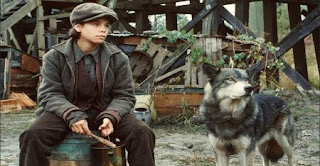 This month, we watched The Journey Of Natty Gann, which is currently available on Disney+ for free. I had never seen this film, but was recommended by one of our movie night members.

This film takes place during the Great Depression. Our dinner theme for the night was depression era foods. For dinner, I made a variation of Hoover Stew. This was apparently a popular dish at the time because it could be made cheaply, but was still filling. Normally, it was made with sliced hotdog, but I made a vegetarian version of it to suit my guest's dietary restrictions. I did this by swapping the hotdog for a can of kidney beans. Here's the recipe:

The original recipe did not call for any seasoning, but this dish is not as bland as you might expect. I would suggest only lightly seasoning it. I added salt, pepper, onion powder, and garlic powder to mine. The goal for me was to bring out the natural flavors and not hide them.

To fit the theme of the evening, being poor travelers, I served this dish to my guests in metal cans. These I collected for the last few weeks and also from the vegetables used to make this dish. I hand washed these cans. This little attention to detail ended up being a big hit and added to the mood that I was trying to set. The only negative is that the warm food made the cans pretty hot to touch. We used napkins around the cans to not burn ourselves while we ate.

Along with the stew, I made some depression era bread. This is simple recipe with minimal ingredients that you may already have in you home.

Ingredients:
4 cups flour
2 cups warm water
2 tbsps yeast
Instructions:
Notice that once again, this recipe lacks seasoning. In this case, I did not add any because I only wanted to have the bread as a way to soak up the broth from the stew.

For dessert, I also went cheap, but did not hold back on the flavor. We made some rice pudding. I had found a depression era recipe, but when I tried to follow it, it failed miserably. So, here is how I made it instead.

Ingredients:
1 cup of dry, uncooked white rice
4 cups of milk (vegan milks work fine as well)
1/3 cup sugar
1/4 tsp kosher salt
1 and 1/2 tsp vanilla extract
1 tablespoon butter
Instructions:
This dish can be served warm or cold. I prefer it chilled, so I put it in the refrigerator to rest before the party. Chilling also helps to thicken the mixture more. Serve with a little cinnamon or nutmeg.
Overall, this entire party was a hit. Everything fit the theme well, the food was better than expected, and also the groceries were the cheapest I have ever bought for a movie night.
Labels: Recipe