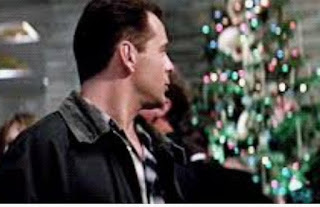 For dinner, I ordered a sandwich platter from the grocery store. They have one where the bread is made round like a wreath, so that is what I ordered, to keep things looking festive. We also had a variety of finger foods, like you might find at an office party. This of course include some bubbly adult beverages. I spent the week before making my popular Apple Cider Wine, a recipe that I have shared with you before. I swear this batch came out better than my last. Everyone loved it. For dessert, I made my famous gobs, a recipe which I shared with you before here. There were other snacks as well that others brought.

Overall, I would say that this was a very successful night. The movie was better that I had remembered. Also, by the end of the film, it was the general consensus of everyone present that Die Hard is definitely a Christmas film.