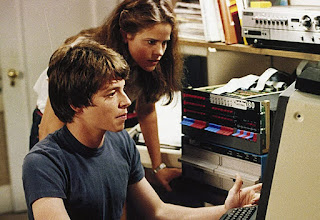 The next movie on our chronological list is WarGames. This 1983 film features a young Matthew Broderick as an underachieving but computer savvy teenager. This film is not only a great story, but is an interesting and accurate look at the pre-internet era of computer technology.

In this film, there is a scene where the protagonist's mother serves raw corn. This inspired me to base the evening's meal on raw and uncooked foods. I made a raw corn salad and a "pasta" dish made a zucchini noodles. The corn was delicious, but the pasta dish I don't plan to do again. For dessert, I served raw but safe cookie dough and a no-bake cheesecake. The desserts were a big hit.

Overall, the movie was great but the dinner was underwhelming. In hindsight, I probably would go with a different theme. Maybe a family dinner with meat and sides and some junk "gamer" food to eat during the film. Also, some pre-movie games could have been fun. Chess and Tic-Tac-Toe both make an appearance in this film, but any strategy game or war game could be a fun ice-breaker for the night.