Our next film took us to 1982's Blade Runner. This film takes place in the distant future of... 2019? The story takes place in Los Angeles, but this is a very different version of Los Angeles than we are used to seeing. In addition to being a cyberpunk future, there are Asian influences everywhere you look. The entire city has a very futuristic Tokyo feel to it. For this reason, I decided to have our meal be Japanese inspired.

The film starts with our main character ordering a bowl of noodles from a Japanese street vendor. Though we can't see exactly what this dish is, it looks similar to ramen but with thicker noodles, so that is what I made for dinner. I used a recipe for vegetarian ramen that I found here as a guide. The main changes that I made is the way that I did the eggs and the noodles. I also used bok choy instead of spinach, and cooked my noodles, veggies, and broth separately, only putting them together when plating. Below is the process the I used. It came out perfectly. 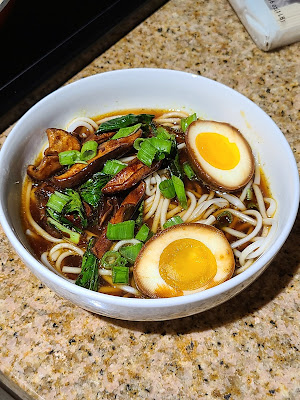 12 eggs
2.75 cups of mirin
.75 cups of soy sauce
.75 cups of dark mushroom soy sauce
I made these eggs by closely following this recipe. They are easy to make, but need to be done 24 hours before you plan to make your ramen.
1. Boil a large amount of water.
2. Remove from heat and carefully lower the eggs into the water. I used a pasta spoon.
3. Return to heat and leave for 6.5 minutes. Don't worry if the water does not return to a full boil.
4. While waiting, make your sauce by combining your three ingredients. If you are using a different number of eggs, just make sure that your sauce is 1 part soy sauce, 1 part dark mushroom soy sauce, and 3 parts mirin. Make sure that you make enough to completely submerge your eggs later.
5. When the eggs are nearing completion, prepare an ice bath.
6. After the eggs have cooked for 6.5 minutes, remove them gently and place them in the ice bath to cool for peeling.
7. Once peeled, place the eggs in a sealable container, submerge them with the sauce, close the container, and refrigerate for 24 hours.
Everything else is cooked day of and can be cooked simultaneously on separate burners.

large pot
lots of water
16 oz pack of dry udon noodles (can be found at Asian markets)
The trick here is figuring out how much you can cook at a time. Udon noodles take a lot of water, so depending on the size of your pot, you may need to cook several batches. Aim to use about 2 gallons of water for 5 oz of dry noodles. The exact amount of water is not important. Use your best judgment. When I did it, I split the pack into thirds and used about 2 gallons of water each time. I didn't measure it out, I just filled my pot as high as I could without fear of boiling over.
1. Boil your water. Adding salt will speed up this process and add flavor to your noodles.
2. Once the water has reached a boil, add your noodles.
3. Let the noodles boil for 10 minutes.
4. Strain your noodles and run them under cold water to wash off any excess starch.
5. If you were not able to cook all your noodles at once, repeat this process until you are done. Don't worry about your noodles getting cold while sitting out. The broth that you add to them later will be hot and will warm your dish.

3 tbsp of sesame oil
9 tsp ground ginger
10 tsp garlic powder
a sprinkling of garlic salt (to taste)
10 tbsp of the mirin/soy mixture the eggs have been soaking in
5 tbsp soy sauce (this is in addition to the mirin/soy mixture)
12 cups of vegetable stock (can be made with 12 cups of water and 12 vegetable bullion cubes)
1. Combine and stir all ingredients in a large pot.
2. Bring to a simmer.

This can be left simmering while everything else is prepared. Stir occasionally.

sesame oil
soy sauce
sliced shiitake mushrooms
chopped baby bok choy
chopped green onions/scallions
1. Put some sesame oil and soy sauce in a large frying pan or wok and put on a medium heat. The exact amount is not important, but not very much is needed.
2. Put as much mushroom and bok choy in the pan as will fit or as you plan to use. Keep in mind that the bok choy will shrink a lot when cooked.
3. Pan sear your veggies until they have color and are well cooked. Mix the contents while cooking to make they are cooking evenly.

Your ramen is now ready to be served. Here is how it should be plated:
1. Using tongs, put some udon noodles in a bowl.
2. With a ladle, pour the hot ramen broth over the noodles to the desired amount.
3. Top your soup with the cooked mushrooms and bok choy.
4. Sprinkle the uncooked chopped scallions over it as well.
5. Lastly, slice a ramen egg in half longways, and add both halves to your bowl.
This dish is best served with chopsticks. 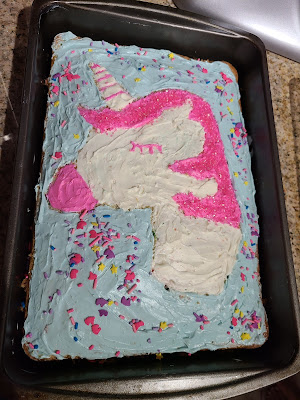 For dessert, I decided that I wanted it to be unicorn themed, based on the dream in the film. I wanted my unicorn dessert to still feel Japanese inspired, so I decided to make it something bright and colorful, following the Japanese kawaii style. If you aren't familiar with that, just think of Hello Kitty and other Japanese cartoons that are meant to look cute.
There are a lot of real clever and colorful unicorn desserts that can be found online that would have worked well for this. Since the ramen took so much of my time and attention though, I decided to go a simpler route with the dessert. I used Pillsbury Funfetti cake mix, which has colorful sprinkles mixed into it. When I decorated it, I also used bright color icings and decorated with sprinkles as you can see in the picture.
Labels: Recipe Vegetarian