Our next film and what we didn't realize at the time would be our last one for awhile because of COVID-19 was Escape From New York. Dinner for this one didn't tie in much with the movie, but instead with the town. I served food similar to what you might get from a New York street vendor, namely hotdogs and nachos. The real thing that made this Film Dining night a fun experience was the pre-movie game. Because this film was all about trying to escape, I decided to turn my home into a makeshift escape room.
This took a lot of time and preparation, but in the end, it was well worth the effort. What I did was use the plot of the movie to make a simple story for our game, which consisted in three puzzles that would have to be solved one at a time in order for our players to successfully "escape New York."
So, here's how the game worked:
1. I asked my guests to divide themselves into groups of three or four people. I let them choose their own groupings. We ended up with three groups of four.
2. I gave each group a sealed envelope which contained the first puzzle. They were not allowed to open it until I said so.
3. I explained the basic setup. I told them that they are each prisoners in Manhattan, which is now a prison island. The president's plane recently went down in the center of the island. Rumor has it that whoever finds and helps him escape the island will be pardoned of their crimes. I then told them to open the first envelope.
4. The first puzzle contained the following maze. Included were instructions to find the route to the airplane in the center and to keep track of the letters you passed on the way there. Once a team completed the puzzle, they would tell me what letters they passed and I would confirm if it was correct. If so, I gave them the next puzzle.

5. The next puzzle explained that amongst the plane wreckage, they found an empty box. An encoded note was all that was sitting near it. 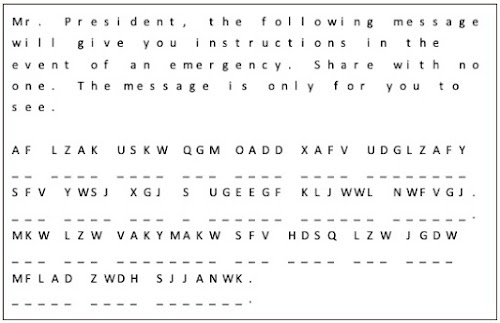 The key to solving this puzzle is that each letter is standing in for another letter. Once you discover one, you can solve the rest. For instance if A is M, then B is N, C is O, etc. This is pretty common and simple coding technique. The trick is figuring out one of the letters. This took awhile to solve, as it was supposed to. (Hint: I hid the key within the instruction message. "The message is only for you to see" is saying that the code works by changing U to C.)
Once the message is decoded, the players discover that the box contained everything the president would need to disguise themselves as a street vendor. In other words, it was me the whole time! When they come to me with the solved puzzle, we move to the final puzzle, crossing the minefield.
6. I give them the last envelope with following instructions: 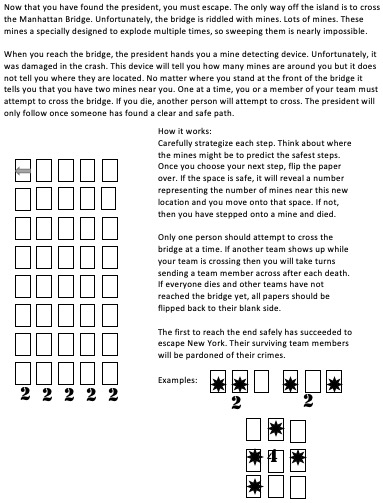 I had set up sheets of 40 sheets of colored paper in the floor of our walkway beside the kitchen. This was set up before the party. On the other side of each sheet was printed either a number on an indication that they had just stepped on a bomb and were now dead. I used playful memes on the bombs to make their death less painful. haha Essentially, crossing the bridge worked a bit like the classic game Minesweeper, except that the the person crossing was limited to moving only one square at a time. Each player was only allowed one attempt to cross and if a team ran out of players, they lost. This ended up being quite a challenge. I had planned it out earlier so that there was only one safe route and some of the choices were not obvious. In the end, a lot of people "died" trying to cross the bridge, but eventually we had a winning team, with one sole living survivor crossing the bridge successfully. This is the winning team posing below with the print that they won as a prize. 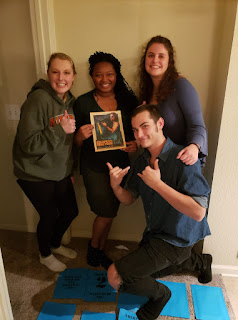 Overall, the game was super successful, and they got to play it while they ate. It definitely set the mood for the film and was a lot of fun along the way. During our dessert intermission of the film, we had chocolate covered cheesecake balls (pictured below), something that I imagined would make a great New York style street food. 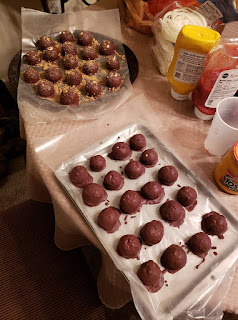