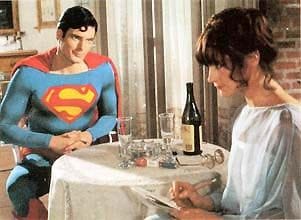 The next film on our list was Superman. The main course for this meal was nothing too impressive. We stuck to traditional midwestern food, since he grew up in Kansas. In addition to the meal, I set up a Spotify playlist with a collection of Superman inspired songs. The main star of the night was actually the dessert. After researching some things online, I was able to come up with a way to make candy kryptonite that glows under a blacklight. I am going to share that information with you, along with positives and negatives that I uncovered during the process. To start off, here is the website that I used.
Some things to note:
First off, she dissolved three 15mg B2 pills in 150 mL. The B2 pills that I found were 100mg, so I dissolved one pill in roughly 330mL of water or about a third of a liter. You just want the contents of the pill, so cut or pull it open and mix the contents with the water. The flavor of the vitamin is very strong, but so is the effect. You could probably use less and it would still work well.
While working with this, do so in a low light environment. Exposing the vitamin to direct sunlight will actually weaken the strength of its glow, so try to avoid direct light while cooking it and also, store it in a dark place until you are ready to serve it.
Making the dish was actually pretty easy. You just mix 150mL of your vitamin water solution with 250g of sugar and bring that solution to a boil. Once the sugar mixture reaches 300 degrees Fahrenheit, stir in food coloring and candy flavor oils and then pour this mixture into your molds, where you will leave it while it cools.
To create the forms, I made long rectangular tracks using aluminum foil and a baking sheet. Make sure you account for all edges to avoid leaks. One problem that I had with the aluminum foil method is that the candy did end up sticking to the foil. It was difficult to pick off. Another potential problem is that all the corners and edges were very sharp. It made sense for Kryptonite to have sharp edges, but it did pose a little bit of a danger when eating. The candy came out very hard and could not be chewed, but rather sucked on like a lollipop or some other hard candy. Next time, I think I might actually make round lollipops, which won't look much like kryptonite, but will be easier to eat.
I used green and red food coloring and appropriate candy flavoring. Don't be afraid to go heavy with the candy oils. The vitamin has such a strong flavor that you need the candy flavor to hide it. The green candy turned out great. The red candy appeared orange under the blacklight. 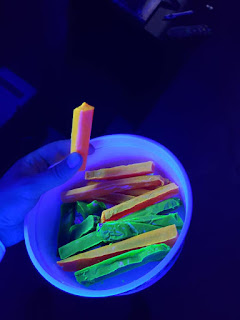 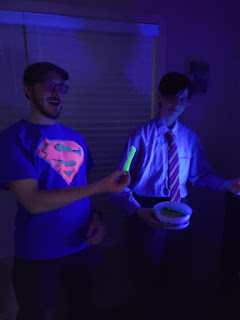 Overall, the kryptonite was a big hit, despite being a challenge to eat. I think people were just excited at having glow in the dark candy.
Labels: Music Playlist Recipe