Mashed Potatoes Of The Third Kind (#46) 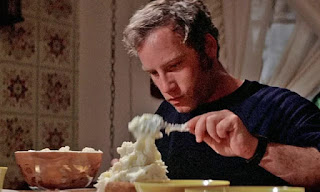 The next film on our list was Close Encounters Of The Third Kind. One of the most iconic scenes from this film is the scene where the main character just starts obsessively taking mashed potatoes on his plate. This became the inspiration for our meal. I set up a mashed potato bar. First, I had mashed potatoes served multiple ways: skin on vs skin off, stove top vs baked, etc. In addition, I had the table set up with every type of topping imaginable: bacon, chives, cheese, mushroom, beef, chicken, sour cream, a couple different types of gravy, etc. The idea was for guests to make a hearty bowl of loaded mashed potatoes that would have enough protein to suffice as a meal. For dessert, I baked a couple layers of chocolate cake, which I carved and decorated to look like Devil's Tower, the iconic setting for the end of the film.
The idea of the mashed potato bar was big hit and a lot of people enjoyed it, but I did have a few guests who felt a little overwhelmed by the amount of carbs and lack of vegetables. The dessert was also a hit. My only regret with it is that, as usual, I forgot to take a picture of it before we dug in. 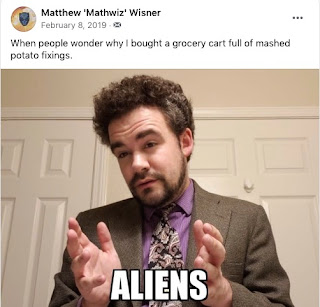