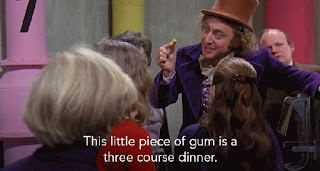 Our next film was another favorite of mine, Willy Wonka & The Chocolate Factory. I had a lot of fun with this theme. I based our entire meal off of Willy Wonka's three course gum. We started with an appetizer of homemade tomato soup. After that came roast beef, baked potatoes, and gravy. Lastly, during our intermission, we had blueberry pie. In addition to this large and filling dinner, we also had a couple bottles of champagne, or as I called it "fizzy lifting drink." Of course, chocolate candies were also available all night. Originally, I had planned on having edible plates and cups, but as it turns out those are pretty expensive and hard to come by, so that did not happen.
Overall, this ended up being a great event. The dinner at first glance didn't scream Willy Wonka, but once you get to the gum scene in the film, it all made sense.