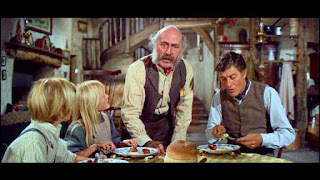 The next film on our list was one of my favorite movies waking up, Chitty Chitty Bang Bang. At the beginning of the film, there is a scene where the family sits down to a breakfast of sausage and eggs. Because the story takes place in Britain and because it made a wonderful pun, I decided that our meal would be the classic British dish, bangers and mash. I also had fried eggs available. This ended up being a great meal. Our dessert, which was served at intermission was based on the sinister candy man that appears in the film. We had lollipops, ice cream, and treacle tarts. I also bought some special lollipops online that act as usable whistles. These were reminiscent of the "toot sweets" featured in the film.
Everything about this event was a hit. The movie was great. The food was great. The lollipop whistles were a big hit as well. Everyone loved tooting them. You would have forgotten that we were all adults, because for a moment, we certainly felt like kids.