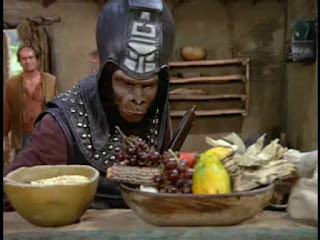 The next film on our list was Planet Of The Apes (1968). For this meal, I decided that I wanted to make a meal that I could imagine a society of apes might eat. Apes are primarily vegetarian, so I wanted to make a meal that was almost entirely fruit and vegetable based. What I ended up going with was a spaghetti that was made with spaghetti squash instead of pasta. I used a recipe that I found online, but I definitely made alterations to it. Most of the recipes that you will find for this try to make a dish that is very healthy. I wasn't as concerned with the nutritional value of the dish, so I ended up adding a lot of olive oil and garlic and salt to make the "pasta" actual taste like pasta and not squash. I wish that I had written down everything that I did, because in the end, it tasted exactly like normal spaghetti. You would have never have known that it was squash. I don't remember what I made for dessert, but I believe it featured fruit, possibly bananas.
Overall, it ended being a great dish, and though it may have not been something that was seen in the film, it did allow for us to connect to the film in a way that you wouldn't expect. That night, we were all apes. hahaha