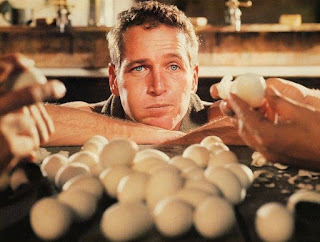 Returning to our list, we had Cool Hand Luke. In this film, the main character Luke is an extremely stubborn and hard headed individual who never seems to back down from a challenge. That includes the way that he eats. There are two food scenes that stand out in this film. In one, he eats a large amount of rice, but the more famous scene is when he eats a ton of hard boiled eggs. For this reason, eggs became the star of our dinner theme. Our main course used both dishes, as I prepared a lot of egg fried rice. We also had deviled eggs available as appetizers and had an egg custard pie for dessert.
Overall, I felt like the connection between the film and the food was strong. For those who had never seen the film before, they made the connection once we got to the egg scene.