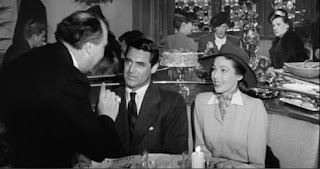 Once again, we break away from our chronological list for another Christmas film. This time, we are watching "The Bishop's Wife." In this film, a helpful stranger shows up in town and helps the local bishop raise money for the cathedral building. This inspired our dinner theme. Though it did not happen in this film, I know that often when churches need to raise money for a new building, one of the things they will do is host a potluck fundraiser, where the community gets together and bakes dishes which people will come and eat while donating money to the church. That became our dinner theme. Guests were encouraged to bring a covered dish when they arrived. It could be for dinner or dessert. Some people made casseroles. Some made cobblers. Just about anything was an option.
I had people start to form a list of what they were bringing to avoid people doubling up. In the end, we had a lot of variety for food and it was all delicious. Though this theme was not particularly Christmas oriented, home cooking does provide a similar level of comfort as a good holiday meal. Overall, I would say that it was a successful night.
Labels: Christmas