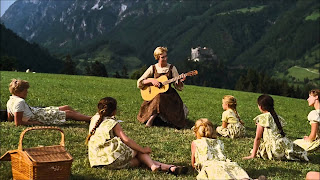 Next up on our list was The Sound Of Music. For our meal, I used the song "A Few Of My Favorite Things" as inspiration. So, we made some of Maria's favorite dishes, namely schnitzel with noodles for our main course and crisp apple strudels for dessert. Because this film is longer than our normal films, we did start the evening earlier than normal, serving dinner at 6 and starting the film at 7. It's important to keep the length of a film into consideration when planning these movie nights.
Aside from food from the song, we had some general Austrian and German themed things as well, such as german beer. All in all, the food ended up being delicious. Many of my guests, including myself, had never had schnitzel before, so it was nice being able to enjoy such a lovely meal before hearing Maria sing about it. I found several recipes for schnitzel with noodles online and just picked one that was rated well that I felt I would be able to cook.