We had to take a quick break in January, but returned to the list in February with Swiss Family Robinson. For this meal, I decided to stick to a tropical theme. I cooked some carribean jerk style chicken with pineapple and made pina coladas which I served in some fake coconut cups with bamboo straws that I found relatively cheap on Amazon. I also bought some tropical looking plants to help set the mood. 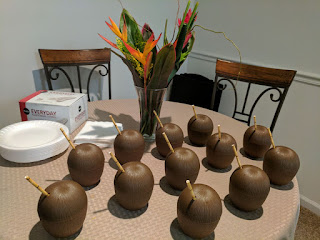 In addition, we had tropical punch and a pineapple based dessert, though I do not remember what kind. There are a lot of options for tropical desserts.
The tropical theme worked really well for setting the mood for this film. It was a successful night overall.