Holiday Supper "Around The Corner" (#21) 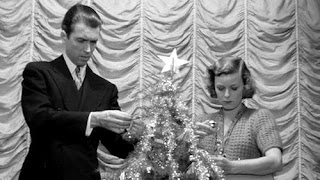 This Christmas, we watched a lesser known classic "The Shop Around The Corner." This film is one that the majority of my guests had never seen despite the fact that it regularly appears on Top 100 best films of all times lists and was the inspiration for multiple other films, such as the popular "You've Got Mail."
I based the meal for this film off of a single scene where a lonely but wealthy man finds out that one of his employees has no one to spend Christmas with and invites him over for a Christmas feast. Though this scene is not important for the plot of the film, it is heartwarming and set an easy foundation for our meal. https://youtu.be/knDv-WJVneM?t=1m38s
The meal described in this scene contained an appetizer of homemade chicken noodle soup, a goose with apple stuffing for the entree with boiled potatoes with butter, red cabbage, and cucumber salad for sides, and apple strudel with vanilla sauce for dessert. Our meal followed this closely very closely and was a tremendous feast. The only alteration we made is that we had apple pie with vanilla ice cream as the rest of the meal was a lot of work already and I didn't feel like adding a strudel to the list.
Overall, it was a very warm and tasty dinner and did a great job setting the mood for the film. I could easily see myself doing this again, perhaps with family.
Labels: Christmas