This was our first Halloween event. Because it was October, I decided to allow myself to break from the usual timeline. I still wanted to stay relatively close though. The movie we decided on was Abbott & Costello Meet Frankenstein. Despite the name, this film actually features much more than Frankenstein. It also stars Dracula, the Wolf Man, and the Invisible Man. Several of these characters were actually played by the same actors who played the horror icons in their original films. Because I this, I decided to give the evening and Hollywood Horror theme. We had a collection of "fancy" finger foods that were very Halloween like.
Fun fact, a little food coloring used correctly can make anything look gross. Moldy finger sandwiches were a key element. They were just regular sandwiches but the bread had drops of green food coloring applied. I also served small hotdog bites. Fun thing you can do with hotdogs is cut them in half to make two fingers, then cut a slit in the round end to put a point piece of onion in for a fingernail. We also had a meatloaf which was shaped to look like a werewolf foot. 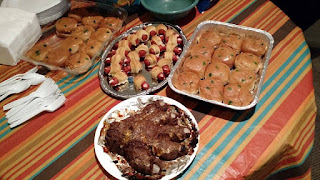 For dessert, I had purchased a plastic mold from Party City that was the shape and size of a brain. I used this to make a brain jello for dessert. Adding condensed milk to the jello thickens it and makes it so it is not transparent. Carefully adding food coloring can also make it look more realistic. When mine was done, it had the color of raw liver. I poured sticky strawberry syrup over it for effect. (The picture below is from a different party so there's no syrup in this pic.) Unfortunately, it looked so realistic that my guests were nervous about eating it. I sliced it like meat so that might not have helped. haha It tasted great though. 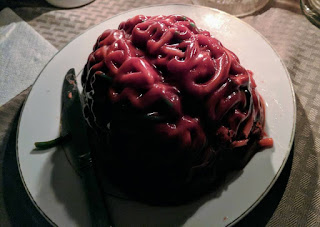