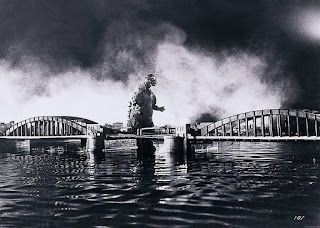 The month's movie was Godzilla. The theme for this was pretty straight forward as we decided to focus on Japanese food. The star of the meal was sushi, not only because it was Japanese but because eating raw fish fits well when talking about a monster that rises from the sea. What eat would he have been eating all of this time? My local sushi place even had a roll called the Godzilla roll, so it was a featured item in the platter that I ordered. 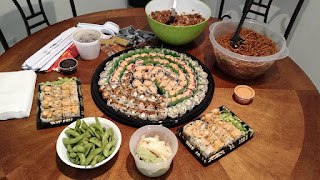 Normally, I try to cook the meals myself, but I do not know how to make sushi and was not prepared to mess it up, so on this particular night, I decide to make an exception and ordered a sushi platter. That was my entire party budget, so thankfully guests helped me with snacks and dessert. Mochi ice cream was our primary dessert but other Japanese candies and snacks were also present. One dinner guest even made us Japanese tea. Overall, the meal was a great way to lead into the film and really set the mood.